Prom Styles Through the Decades 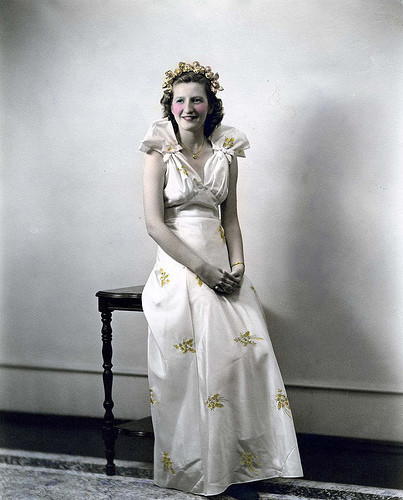 It's Spring time and Prom season is here! If you werent aware then you are now. Prom is the event of the year when youre a senior in high school. Its the event that everyone looks forward to as they hit that last year of high school, other than graduation. Its a significant event in almost every teen movie out there. Its a tradition that has been a part of American culture since the late 19th century and its been adopted by other countries throughout the years. Thats a long time. When you think about it, your parents probably went to prom. Of course when you hear about your parents prom, you want to see their old prom pictures. Specifically, you want to see your moms prom dress.

We are in the generation where Instagram, Facebook, Twitter, and Snapchat exist and were able to see exactly when trends start and end at the tip of our fingers. For people existing in the 1990s, they werent able to know what was fashionable as soon as it started. So were lucky to have our phones to figure out what to wear for prom. Its crazy how prom dress styles have evolved over the years. This is a recap of what women use to wear at prom.

The 30s was when prom started becoming popular with the middle class. During this decade, girls wore sleek, floor length, modest dresses.  There was an emphasis on the natural waist with seams starting just below the bust. 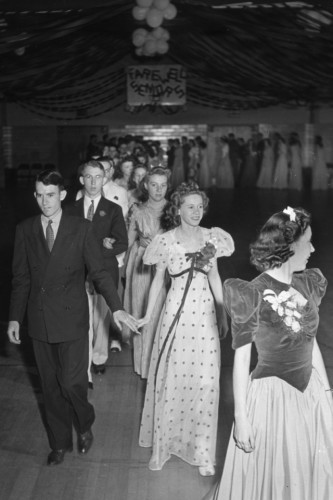 The 40s silhouette is thought to be the sexy, pin up look of an open neck and a pencil skirt. But most of the fashion consisted of a modest top, fitted waist and knee length A-line skirt. That look was also present at prom, but with a longer gown and puffed sleeves. The tops of dresses started evolving into more structured lines to give girls a more hourglass shape.  Dresses and gowns were simple and shiny back then and would be more on the casual side. But you would find girls who wanted to be more daring by showing their shoulders. Towards the end of the 40s, girls started wearing fuller skirts.

In the 50s, you would most likely see big, full skirtsmore specifically tulle skirts were popular. The fuller the better. Dresses during this decade were either tea length or floor length. Having ruffles on the skirt was a nice option that gave girls a nice pop. The bodice of the dresses became more curve hugging and shoulder baring. Having a tiny looking waist was the look of the decade.

Entering this new decade, you would see a big shift in style. Dresses then, had higher waistlines and slimmer skirts. The style of tops also changed, dresses moved towards spaghetti straps and boatnecks. Later in the decade girls were into the empire waist. Though in the mid 60s and into the 70s, there was dip in the popularity of prom and that might have been due to the cultural and political issues at the time, such as the Vietnam War and the anti-establishment movement.

The 70s was known as the age of flower power disco. Fashion during this time was so diverse and experimental. Prominently we saw more loose, flowy dresses. But we still saw the slim skirt from the 60s. Most dresses had long bell sleeves or they were off the shoulder. But then the movie Carrie came out and we saw a slight shift to a clean-lined strappy dress with a flowy skirt.

During this decade, we saw the rebirth of prom. We also saw bold styles, colors, and silhouettes. It was the decade of the power dresser but also of punks. I would say Madonna was a big influencer of the 80s. Girls during this time were spotted with a nice big bow and poof! The sleeves and skirts were so poofy. And surprisingly ruffles made a comeback. This is reminiscent of the 50s. We also saw them embrace metallic. Now imagine all those three elements together, I would say that they define the 80s.

The 90s was the time of grunge (which is still popular now). Unfortunately, that style didnt apply to prom dresses like I thought it would. We still saw the same metallic sheen from the 80s. But off the shoulder came back and sweetheart necklines became popular. The waistline of the dresses dropped though and dresses became sleek and slim. We saw the Carrie look come back. Later in the 90s slip dresses became very popular and its a style that I still see girls wear causally. The dresses did range from floor length to mini dresses.

Prom hit its peak in the early 2000s and hello! we were graced with amazing prom-centric teen movies, like Mean Girls, A Cinderella Story, and Shes All That. We saw higher necklines, like halter tops, begin to become very trendy. Beaded dresses with sparkly embellishments and bright colors were well known parts of the early 2000s.

In the 2010s we saw a total shift of style. We can thank social media for that. With the rise of social media, the need to be talked about rised as well. Celebrities started being more daring on the red carpet for attention and we can see girls wanting to mimic those same looks. In the past few years, Weve seen a lot of two piece looks that show off the midriff, high slits, and cutouts, and bodycon. Check out our Prom Trends Lookbook for more styles.

The 2020s can now either be consistent with the styles today or it could go in a completely different direction. No matter what happens, even if we look back and cringe, hopefully every girl feels beautiful in whatever dress they choose then. But for now maybe we can draw inspiration from past decades for a more unique look. Perhaps the 50s style will come back?

Website uses cookies to give you personalized shopping and marketing experiences. By continuing to use our site, you agree to our use of cookies. Learn more here.